On Saturday, May 19th, I had the honor of being a featured performer at the annual Wheels for Humanity Spirit of Movement Awards held at the Renaissance Hollywood Hotel. This wasn’t a typical gig where I would perform for the guests during dinner. No, this special evening I was introduced on stage to speak about and perform one very special song that I wrote for my biggest fan, Mason.

The quick back story on the song is that I composed “The Divine Within” for Mason’s birthday and told him I would be donating 50% of the proceeds from the song to the charity of his choice… Mason chose Wheels for Humanity. I released “The Divine Within” as a single last fall and began a campaign to get the word out about it through my website, facebook, newsletter, blog, twitter and youtube. In addition to digital distribution, we created physical CDs so we could maximize our opportunities to raise as much money as possible. Some people paid $0.99 for the song and many people were moved to contribute more. Six months later, I am proud to say we raised $450!

In coordination with Wheels for Humanity, we came up with a plan to present the money we raised for the charity at their big annual fundraising event. I was introduced by Laura San Giacomo and while sitting at the piano on stage, we bantered a bit and I told a quick story about meeting Mason and writing his song. Then the room came to a dead silence as I played “The Divine Within.” Following the performance, Mason and I presented the donation of $450 to the UCP Wheels for Humanity CEO, Ronald Cohen. It was a great moment in the evening and a surprise to the audience who up to that point didn’t know that we were raising money with the song. You can see a clip of the great moment in the video at the top of this post. 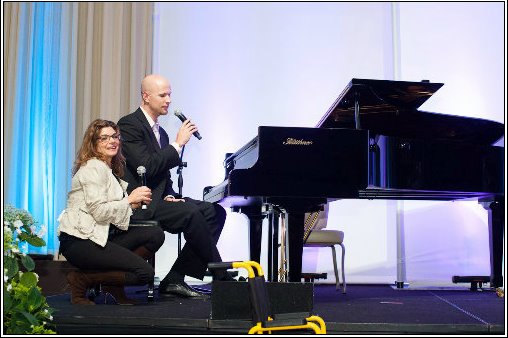 being introduced on stage by Laura San Giacomo

This particular experience of giving my gift of music has been more rewarding than I could have imagined. To create music from my heart as an actual gift for someone who was so appreciative and then out of that, create an opportunity to raise money which then turns into the gift of wheelchairs for disadvantaged people in developing countries around the world? Wow. I find that when I live from a place of service it produces ripple effects that I can barely fathom. What really inspires me are the visionaries and CEOs, like Ronald Cohen, whose mission in life is to give back to those in need and are doing it with such profound impact. The experience has left me with an even greater desire to contribute more on a bigger scale as my life and career continues to evolve.

So if you are reading this, and haven’t heard the song yet and want to purchase it, you can do that right here. We will be continuing to donate 50% of the proceeds from the song to Wheels for Humanity on an ongoing basis, so know that you are contributing to an amazing cause by supporting my music.